A personal travel diary of places I have lived in, loved, and never wanted to leave 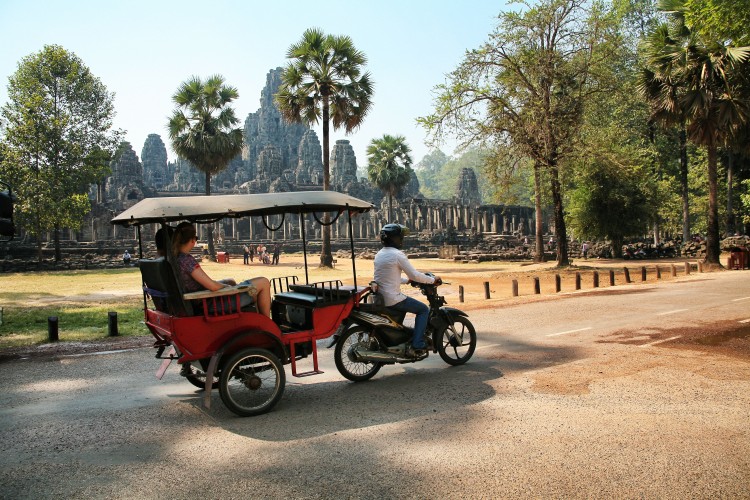 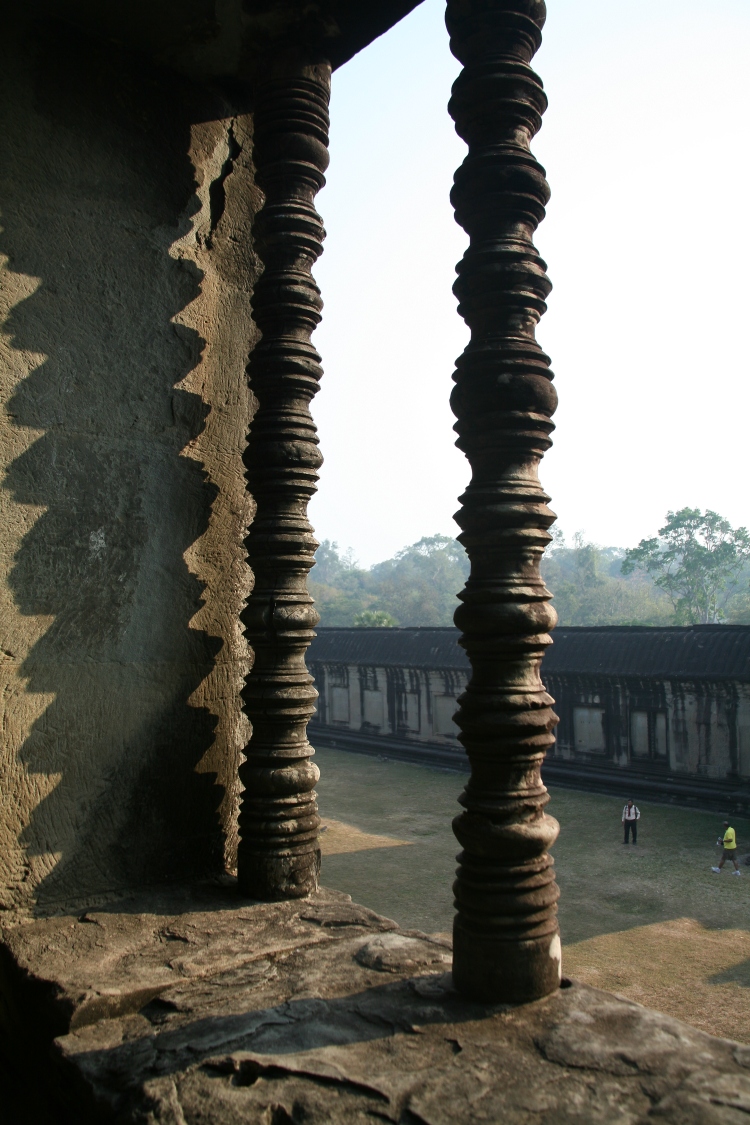 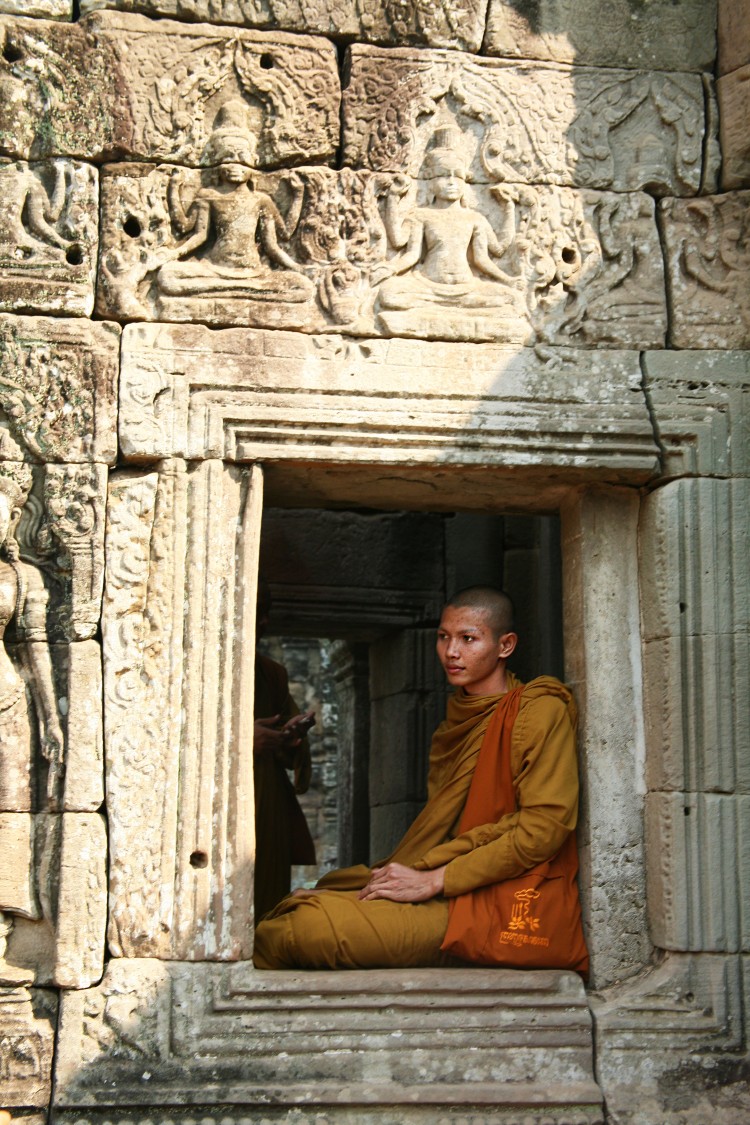 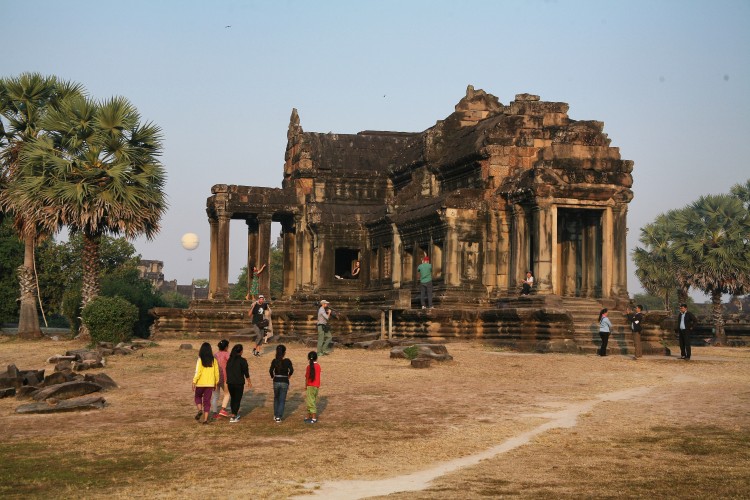 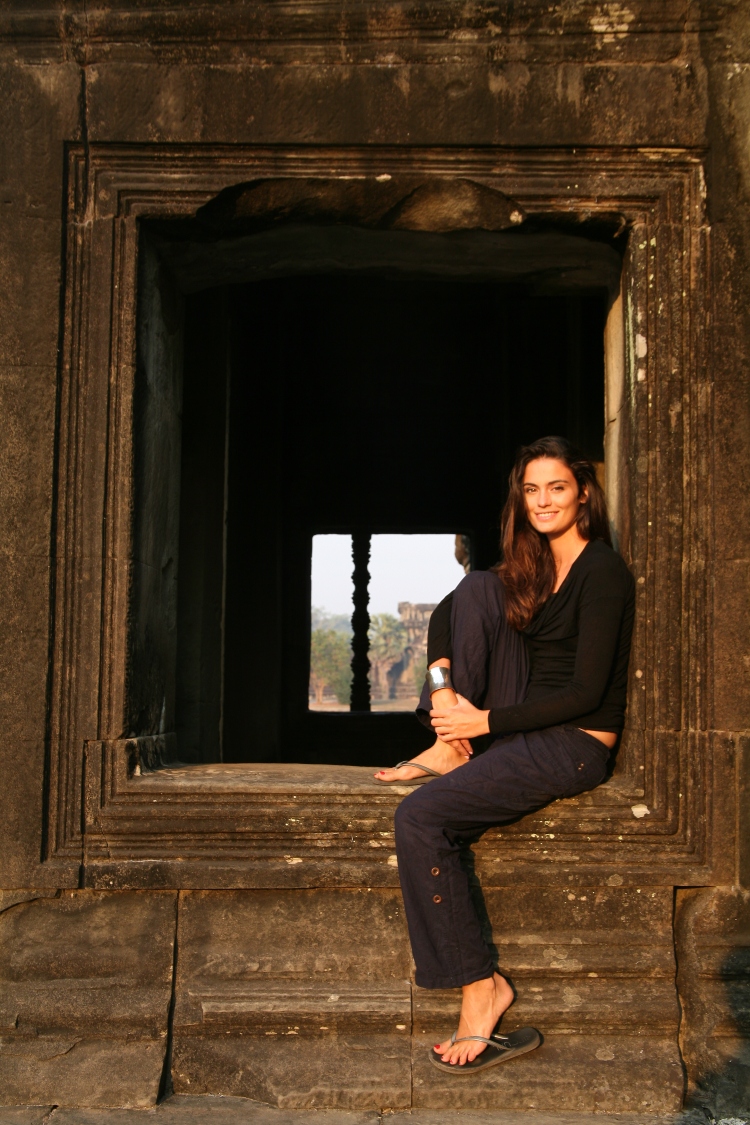 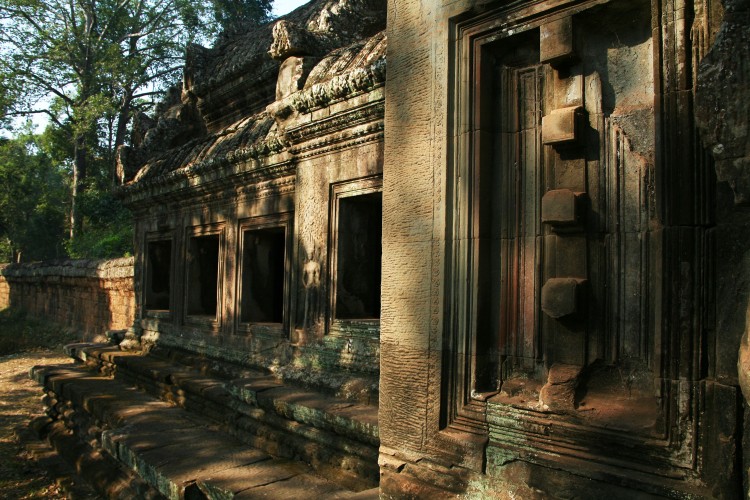 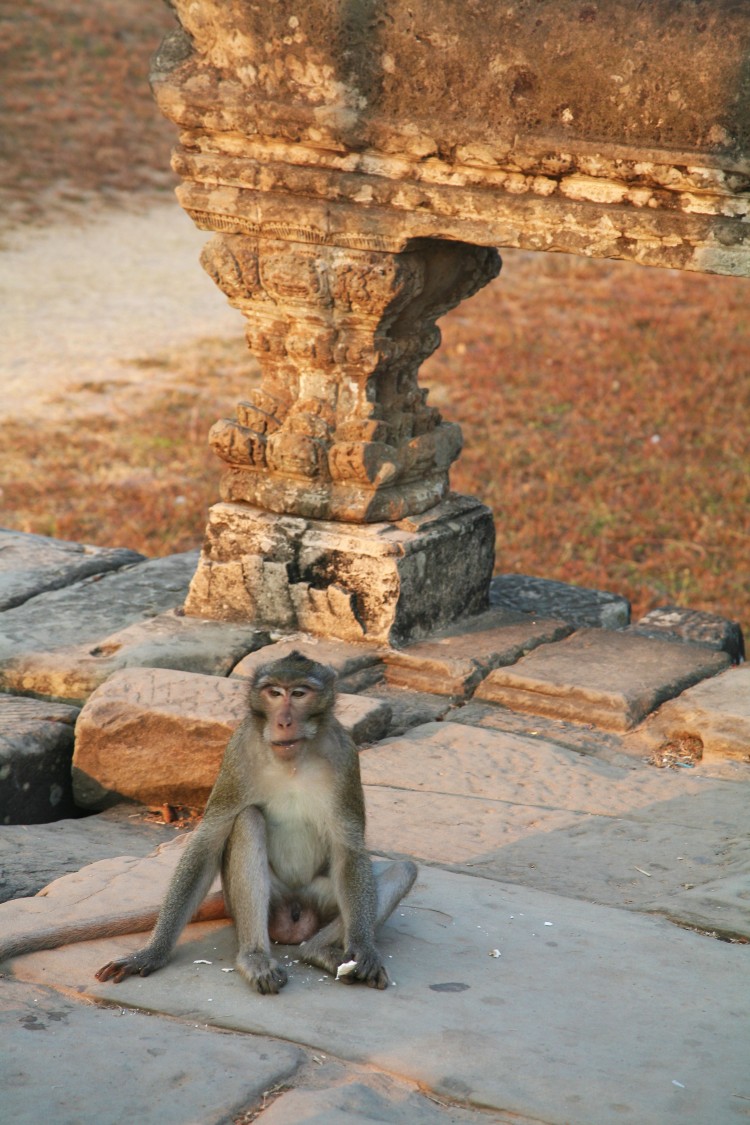 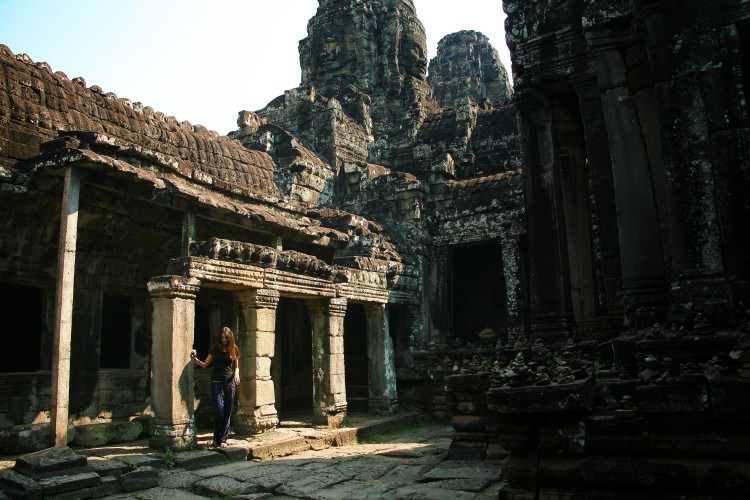 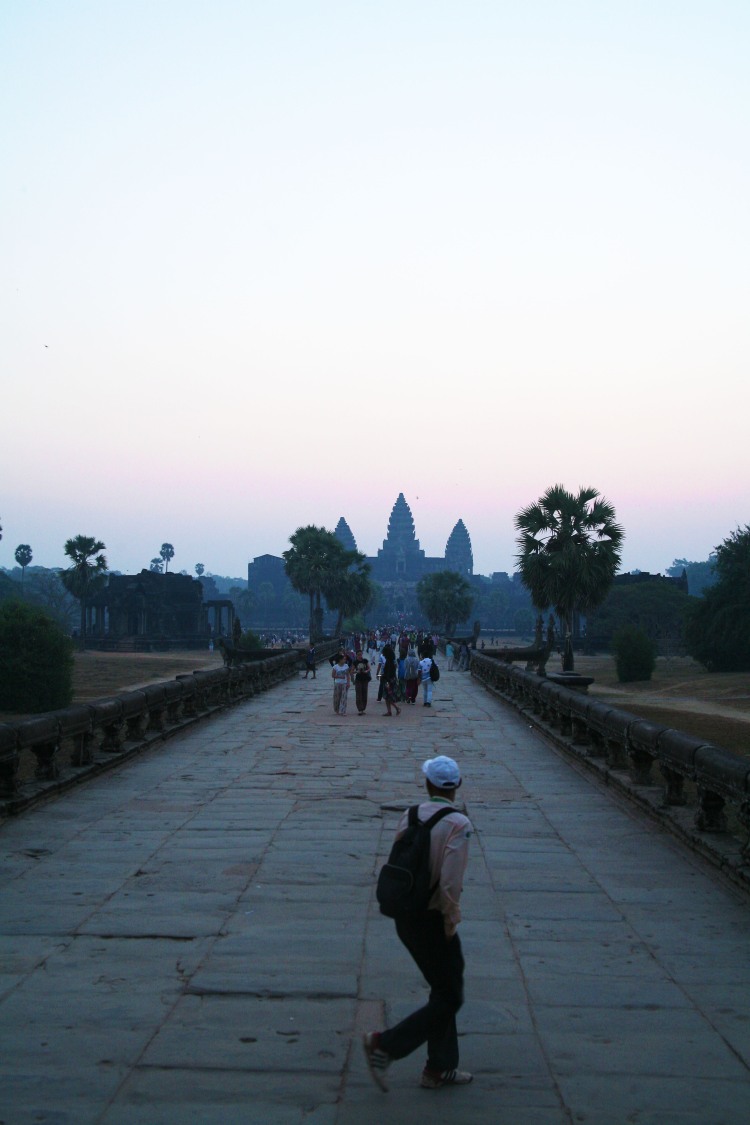 Angkor Wat is not only the largest religious complex in the world, but also one of the largest archeological sites in existence. The main temple is so sprawling that notwithstanding the crowds, you’ll often find yourself wandering alone down a long, empty corridor, or admiring the intricate carvings in a low-lit, echoing corner. The perfect symmetry of the structures creates a play of light and shadows that is mathematically perfect, purposefully designed to evoke a mystical, awe-inspiring atmosphere. Each architectural element is studied; the bas-reliefs of the temple were designed to be viewed in an anticlockwise direction, a practice that has precedents in ancient Hindu funerary rites. This, along with Angkor Wat’s westerly facing direction (most of the other temples face East), led many scholars to believe that Angkor Wat must have existed primarily as a tomb, since the western direction is a traditional symbol of death. Accordingly, the best time to admire Angkor Wat is at sunset, when the burnt orange light streams moodily through the elaborate window columns and reflects off the lotus-covered lake.

The main monument was originally built in the 12th century by the Khmer Empire as a dedication to the Hindu God Vishnu. The layout is intended as an earthly representation of Mt Meru – the five-peaked sacred mountain of Hindu and Buddhist cosmic mythology. The central, lotus-shaped tower is Mt Meru, with its surrounding smaller peaks, bounded in turn by continents (the lower courtyards) and the oceans (the moat). When you wander through the temple to the main tower, you’re essentially travelling back to the first age of the creation of the universe.

Angkor was once home to approximately 750,000 people, making it the largest urban complex of the pre-modern world. But by the time the Portuguese came across the site in the 1500’s, it was essentially deserted. Why this is is still uncertain. Angkor remains a magnificent enigma shrouded in mystery. Just in 2015 new underground towers were discovered along with a huge, mysterious underground spiral. Massive cities between 900 and 1,400 years old have been found beneath the tropical forest floor, some of which rival the size of Cambodia’s capital, Phnom Penh. Every year it seems, Angkor Wat throws up more cryptic questions than it answers.

Ta Prohm is a tropical fairytale. Claimed long ago by the jungle, the sprawling, sinewed roots of the aptly-named strangler fig continue to slowly choke the temple walls. It’s one of the few temples to have been left largely as it was when it was found, and it’s easy to imagine yourself as an explorer (or tomb raider) discovering it for the first time. While Angkor Wat is awe-inspiring in it’s symmetrical perfection, Ta Prohm is a dappled, crumbling daydream. Dislodged, delicately carved rocks pour into forgotten courtyards, blocking off obscure corridors and diverting visitors into an unintentional labyrinth. The dappled light filters through the leaves of the silk-cotton trees onto the ancient, lichen-covered rocks, cloaking the entire temple in a surreal, greenish shadow.

Visit first thing in the morning when everyone is watching the sunrise at Angkor Wat. Since this is one of the smaller temples, it gets crowded much faster. I may be biased because it’s my favourite but as the most romantic temple I think benefits most from being viewed when it’s quiet.

If you want the romantic atmosphere and beautiful protruding tree roots of Ta Prohm but with fewer visitors, visit Preah Khan. To the north-east of Angkor Thom, Preah Khan is much larger than Ta Prohm and wasn’t used as a set in the Tomb Raider movie, so it suffers less from overcrowding.

Just north of Angkor Wat is the Angkor Thom temple complex, with Bayon at it’s exact centre. The Buddhist temple is built over three levels and originally boasted 54 towers (now 49) carved with the 13-foot faces of Lokiteshvara – the Bodhissattva of compassion. The columns are carved on all four sides and are staggered on different levels, so that the faces, all 216 of them, loom down on you from all angles. More than imposing, the serene smiles and closed eyes of Lokiteshvara feel comforting, and lend the whole temple a uniquely peaceful, and slightly mysterious, atmosphere.

Bayon looks best just after sunrise or at sunset.

Also in Angkor Thom is the Hindu temple Baphuon, dedicated to Shiva. Built over three tiers that gradually narrow towards the top, it looks the most like a traditional pyramid, if a very intricate one. Climb to the top for wonderful views of the forest that surround it. It’s somewhat camouflaged so be sure not to miss the enormous reclining Buddha painstakingly pieced back together by archeologists.

Baphuon is quite large and not as crowded as some of the other temples, so any time of day is good to visit.

Distinctive for it’s unique pink-hued sandstone, Beanteay Srei, once again dedicated to the Hindu God Shiva, is most noteworthy for the amazing condition of its extroardinarily intricate carvings and bas-reliefs.

For a much more in-depth guide to all the more minor and remote temples in Angkor Wat and around Cambodia, check out my post Ten Ways To Beat The Crowds At Angkor Wat.

2 thoughts on “A guide to the temples at angkor wat”